There is less than a month left until the Lunar New Year 2020, the commodity market becomes active due to the strong increase in demand.

For the alcohol-beverage market, consumer demand increased rapidly, however, there were no abnormal price fluctuations and businesses supplied enough for the market.

Prices tend to increase but not by much

Entering the end of the year – the peak time, the domestic commodity market has become more active, with many activities to connect the supply and demand of raw materials and materials for production, ensuring the supply of goods to serve the needs of consumers. consumption during the Lunar New Year. According to statistics, the total retail sales of consumer goods and services in October was estimated at nearly VND 426 trillion, up 1.5% over the previous month and up 13.3% over the same period last year. 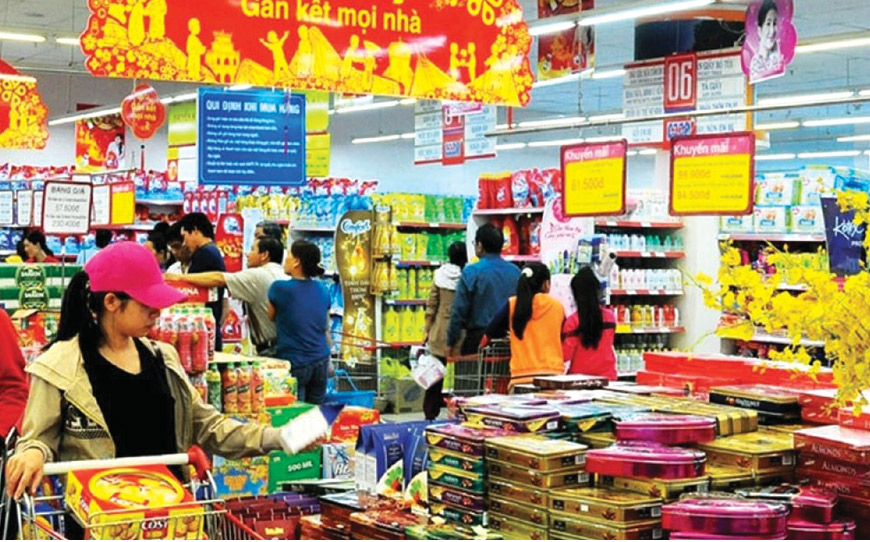 In particular, the market for alcohol, beer, and soft drinks is heating up. For the beverage market, the development and intensity of competition among firms and production facilities are increasing. According to statistics of the Vietnam Beer – Alcohol – Beverage Association, the whole country currently has more than 1,800 beverage production establishments, the annual growth rate is 6-7%, of which carbonated soft drinks (water) sweet) accounted for 23.74% of the market share, beverages in the form of tea accounted for 36.97%; Energy drinks accounted for 18.28%, fruit juices 10.91%, mineral water 5.45%.

According to the business world, Vietnam’s beverage market is tending to strongly develop product lines that are both refreshing and have health-promoting elements such as energy drinks, vitamin drinks, and water extracts. from fruits, cereals, tea, ginseng… From the needs of consumers, many new product lines of new soft drinks were born and competed fiercely.

The Ministry of Industry and Trade forecasts that the total retail sales of social goods and consumer services in 2019 will reach about VND 4,901 – 4,923 trillion, up from 11.6 – 12% compared to 2018, reaching the target level. the proposed plan (the plan is to increase 11.5 – 12%). From now until the end of the year, the demand for raw materials for the production of consumer goods and Tet goods will increase sharply.

For example, in Hanoi, according to data from the Hanoi Department of Industry and Trade, it is expected that the number of essential consumer goods prepared to serve consumer demand during the Lunar New Year in 2020 will increase sharply such as rice, types of meat, vegetables, processed foods, dried agricultural and forestry products, confectionery, wine, beer, soft drinks, garments, fashion, electronics… The estimated total value of goods serving Tet in the area The city’s table reached about VND 31,200 billion, an increase of about 10% compared to the plan to reserve goods for Tet 2019. In Ho Chi Minh City, it is expected that the demand for essential goods at the end of the year will be strong, such as pork increasing by one and a half times compared to weekdays; demand for beer and soft drinks increased by about 30% compared to normal month…

Although the demand for goods from now until the end of the year is so high, according to the Ministry of Industry and Trade, there is nothing to worry about, because the supply of goods from domestic production and import is very abundant. Commodity prices tend to increase but the increase is not large, there are no unusual price fluctuations in most of the essential commodity groups.

A representative of the Domestic Market Department said that to ensure enough supplies for the market, from now to the end of the year, the Ministry of Industry and Trade will focus on controlling and closely monitoring the commodity market, especially for essential items with high consumer demand. At the same time, the ministry suggested local authorities and agencies monitor and assess the supply and demand of goods.

There is less than 1 month left until the Lunar New Year 2020, up to this point, many localities have actively implemented the market stabilization program in the direction of connecting Tet businesses with organizations. credit, carrying out the reserve, ensuring the supply of goods. Typically, Hanoi has completed the plan to organize “Promotion Month”, fairs and markets to bring Vietnamese goods to the countryside… to ensure adequate and timely supply of Tet goods to the people.

Especially, at the end of the year, when the demand for buying and selling and consuming goods increases, it is also the time when the subjects increase their activities in transporting and trading banned and smuggled goods, violating food hygiene and safety, etc. A representative of the General Department of Market Management (Ministry of Industry and Trade) said that from now until the end of the year, the market management force will continue to coordinate with relevant units to strictly control the commodity market in order to timely prevent smuggled goods and banned goods; inspect the implementation of the provisions of the law on price, measurement, quality…

At the same time, the General Department of Market Management will strengthen inspection and control of food transport routes and inter-sectoral animal quarantine checkpoints; control the assurance of food hygiene and safety at food production, processing, and import establishments, business and food stores, wholesale markets, people’s markets, supermarkets…; check stamps, labels, and packaging for traditional items with high consumption demand during the Lunar New Year of the Rat.

AVIA Joint Stock Company (A member of AMACCAO Group) affirmed that all products from drinking water and alcohol of the Company did not increase to serve customers during Tet this year. Currently, AVIA has tripled its factory capacity to meet the market’s demand at the end of the year. What is white wine? Since when is this drink available?